NEXT: Sun in H Alpha

Blogged by Jonathan Maron on December 15, 2011 and tagged with Press. 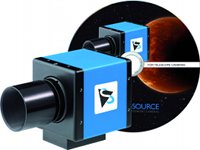 Months of development and testing are finally over. Today, we are delighted to announce a new series of six extremely high resolution astronomy cameras.

They are fitted with a 1/1.8 " progressive scan CCD image sensor with square pixels, and are available in monochrome and color variants, with and without an IR cut filter.

The astronomy cameras ship in robust, blue and black industrial housing, which measures 50 mm x 56 mm and weighs only 260 g. The included nose piece is mounted onto a C/CS mount on the front of the camera. On the rear, a USB or GigE connector is available. A threaded tripod adapter on the bottom rounds off the exterior of the camera.

The cameras ship with the camera control and acquisition software IC Capture.AS, which allows image sequences and singular images to be written to disk. Furthermore, using the highly intuitive graphical user interface, all camera parameters, such as exposure, sensitivity and frame rate, can be set.

The astronomy cameras are available worldwide and start at only € 800.00 or $ 1,000.00 (without shipping and sales tax). They can be purchased from any one of our international network of dealers.