NEXT: Jupiter Pictures by Aussies

Blogged by Xiao Sun on April 27, 2009 and tagged with Sample Images, Sun, Venus.

Patricio Dominguez Alonso, from Madrid, took this image with his DMK 31AF03.AS: 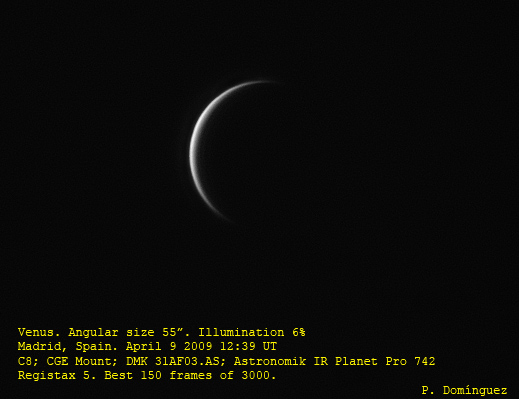 He wrote us in the e-mail:

Recently I have taken a image of Venus near the inferior conjuction using a DMK 31AF03.AS with a near infrared (Astronomik IR Planet Pro 742 filter). The telescope was a vintage Celestron C8 on a CGE mount. The picture was taken just afernoon under a heavy sun for the april standards. The atmospheric turbulence was strong and the video images were blured and shaked (see the youtube samples, links given bellow).

The ability of IC Capture.AS to record ROI was extremelly important as allow me to record a high number of frames alowing a relativelly small file size ready to process. I have used Registax 5, I made first a reference frame from the best 150 frames of a total of 3000 from the first video. In a second run, I used such a reference frame for further alignment. Then I selected by hand the bestframes. This is the result after removing ring artefacts and noise in Registax.

That is quite a lot of details Patricio. Thank you!

NEXT: Jupiter Pictures by Aussies
-