Blogged by Xiao Sun on April 24, 2009 and tagged with About Us, Software for Windows. 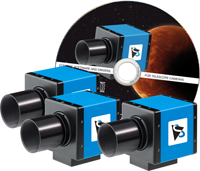 Known to be a powerful and stable image acquisition tool, IC Capture.AS is among the favorites of the astronomy camera consumers . The Imaging Source, the software's manufacture, is constantly doing its best to meet or go beyond the expectation from all customers across the world.

A couple of days ago, The Imaging Source released the French and German versions of IC Capture.AS. All language versions share the identical functions including:

In case you still have no idea, Astronomy Camera's official web is constructed with six languages, including English, Chinese (both Simplified and Traditional), German, French, Italian, and Spanish. And this English blog is also available in French and Chinese.