My Best Saturn & moons of the Season!

My Best Saturn & Moons of the Season!

My best Saturn with the C-11 this Season!

I talked my observing buddy Ron Whitehead into setting up his C-11 Scope (my old C-11, long story) known for its sharp optics! We had a decent night of planetary seeing on 05-30-11 to 05-31-11, maybe a 7 out of 10, very rare for Ohio. I captured some images of Saturn with 4 of its Moons visible, Rhea, Enceladus, Mimas, and Dione, but Hyperion was just out of the FOV in the lower left. I captured about 2 hours worth of LRGB Avi's sequences ranging from 02:15 U.T. to 04:30 U.T., I captured these images using my DMK 21AF04.AS Fire-Wire Monochrome Camera, 2x Barlow, Optec 2″ IFW Intelligent Filter Wheel, Astronomik LRGB filters, attached to Ron's C-11 scope. Captured separate LRGB, Y800 Avi videos sequences in IC Capture.AS software, I processed 700 to 1000 good clean frames in each Channel LRGB in Registax 6 (multipoint alignment), and Post processed and aligned each of the LRGB channels in Maxim DL, using the Planetary Mode. Final Luminance & RGB sequence assembly in Adobe PS. I enlarged the image via re-sampling.

The Moons were processed separately to remove the motion blur from the channel to channel shots, as the little moons tend to orbit Saturn rapidly. This one captured around 03:23 U.T. A lot more work than the actual LRGB assembly[...] not sure it was worth the time, the signal was rather weak, so I did not get much;-) I barely detect the Encke division near very edge of rings, but it almost got lost while I was processing[...] but light de-convolution and mild wavelet brought it back. I lost a little bit of the Crepe ring during processing, but I can live with that, in trade for the higher contrast & deeper color saturation image.

Overall I'm happy with this Saturn image, hopefully we get more nights like this, as we are always trying for more detail[...] usually very tough from Ohio. 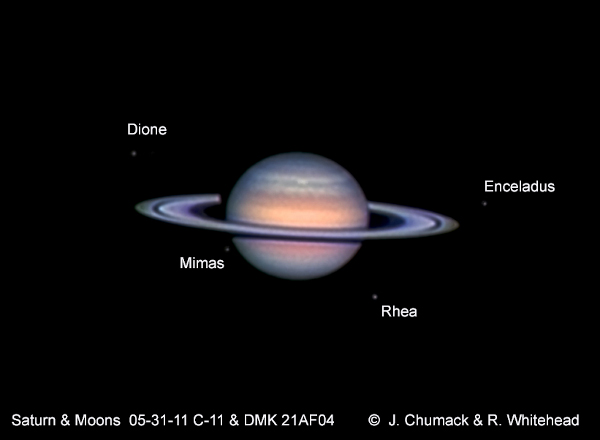