NEXT: First Jupiter Shot After 4 Years

Dr. Patricio Domínguez works for the Dept of Palaeontology & Geology Sciences at Universidad Complutense de Madrid, or Complutense University of Madrid in English. Apparently he is also a fine astrophotographer. In his e-mail on 01.Sep, he provided us some intriguing Jupiter images accompanied by detailed introduction.

Here is a picture of Jupiter using my new methane line filter on my usual The Imaging Source DMK 31AF03.AS camera. The picture was taken at Tres Juncos observatory (Ciudad Real, Southern Spain) with a Celestron C14 on a CGE mount. 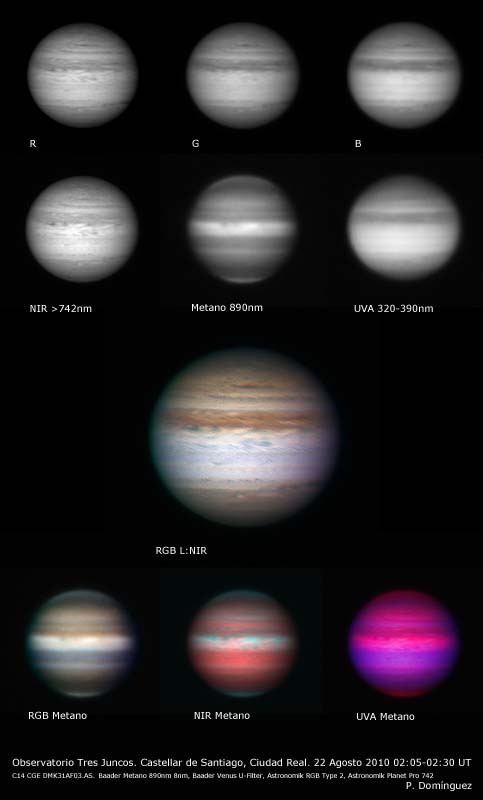 The methane line filter image shows the absorption of the sunlight by the methane molecules of the jovian atmosphere. Where the atmosphere contains methane the picture is dark. However, the clear areas are the uppermost stratospheric haze which make the equatorial band of Jupiter very bright as well as near the poles. These dark areas become more friendly to our eyes when are transformed in red as in the central lower picture.

RGB pictures were taken with the Astronomik RGB type II filters, UVA with Baader Venus U-Filter, NIR with an Astronomik Planet Pro 742 and Methane with the Baader Methane 890nm (8nm wide) line. C14 en CGE and my usual . 1000 photographs each (a 1/125s-1/30s) except the Methane for which 55 frames of5 seconds each at maximum ganance. Seeing 3/5.

The big colour picture was obtained using the RGB pictures plus NIR as luminance. The lowermost at the right is the same but using the Methane picture as additional luminance. For the lower central picture, I used NIR for the red channel and Methane for green and blue channels and for the last one I used UVA and methane for red and blue channels and green channel in black.

Thank you Dr. DOMINGUEZ! These are extraordinary photos and analytics. Do not hesitate to send us more!

NEXT: First Jupiter Shot After 4 Years
-