A Picture of Star 45Cap, Europa and Io

NEXT: More Images of Jupiter After the 2009 Impact

A Picture of Star 45Cap, Europa and Io

Blogged by Xiao Sun on August 17, 2009 and tagged with Sample Images, Jupiter.

Occultation is astronomical event where one celestial body in the foreground covers up another celestial object in the background. On 3rd/4th August, Jupiter occulted the star 45 Cap in parts of Europa, Africa, South America and the Middle East.

Mike Salway, based in New South Wales, Australia, did not get a chance to observe this rare view, but instead, he captured the star 45Cap, Europa and Io in one picture after the occultation. 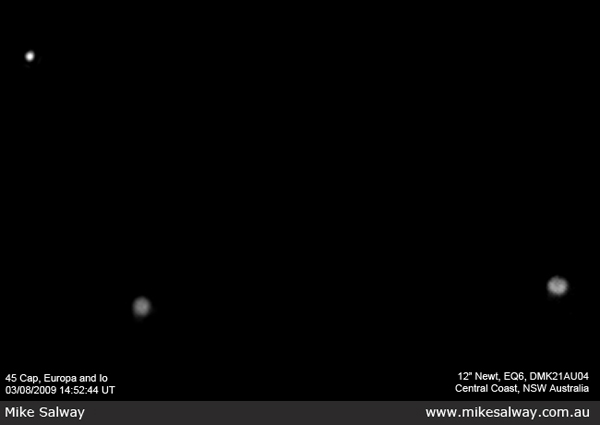 Here is what he wrote in the e-mail:

For other parts of the world, including mine, the star wasn't occulted by Jupiter but instead gathered close enough in the field of view for a conjunction with Europa and Io while I was out imaging Jupiter this morning.

Here's my image from the close approach. 45 Cap is on the far left, Europa is next, and Io (with albedo features)is on the far right.

Europa and Io were on a path to have their own occultation in about an hour from the time the image above was taken, but clouds came and ruined my chance to capture their encounter.

As always, Great Work Mike! Many thanks!

NEXT: More Images of Jupiter After the 2009 Impact
-