NEXT: Tranquillity Base on the Moon

Blogged by Xiao Sun on May 5, 2009 and tagged with Sample Images, Jupiter.

Mike Salway has been working really hard lately. After we posted his Jupiter image last week, he took the following pictures on the morning of May 02 local time and sent them to us right away. 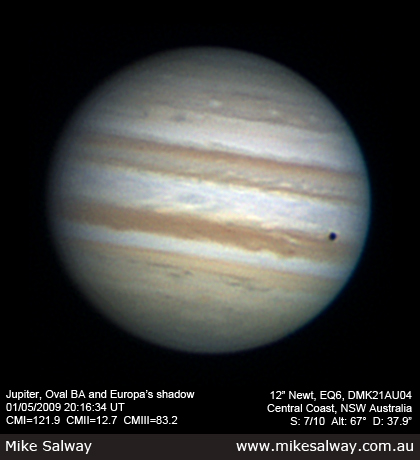 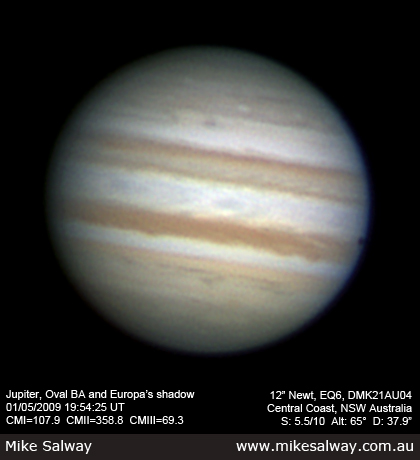 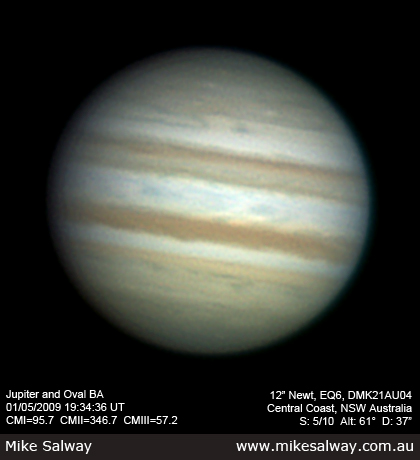 Besides the Jupiter pictures above, he also provided the following info on them:

Usually the seeing at my location is best between February and June, but this year it's been horrible every day - I've been out trying to image Jupiter almost every clear morning for 2 months and have been increasingly discouraged at not having anything better than 5/10 seeing all year. Well finally the good seeing has started to arrive with a high-pressure system overhead. On Saturday morning, 2nd May 2009 (local time) I had the best seeing I've had this year so far, as it peaked at 7/10 in my last imaging run of the session. Jupiter was at a nice high altitude of 67° when I packed up. Oval BA still appears orange but does appear to be lighter than last year. The resolution still isn't there yet to see any other structure within it. Europa's shadow is visible on the Eastern limb. The first image is the best from the session - before that the seeing was typically average

Thank you Mike for the spectacular pictures!

NEXT: Tranquillity Base on the Moon
-