PREV: A Few Thoughts from Germany

NEXT: A New Stacking Program Revealed

The following article is from a Mac user in Sweden that joined The Imaging Source community this past summer. He originally purchased the DMK 41AU02.AS specifically for planetary imaging but was quite surprised when the 1/2 chip based CCD camera surpassed all of his expectation. This will be the first of four blogs highlighting Mr Rosen's fine work. He writes:

I recently bought a DMK 41AF02.AS to use mainly on planets and the moon. I use a Mac so I also bought AstroIIDC for the capture. As I live in central Stockholm, Sweden there are obvious limitations for DSO-photography due to light pollution, and I had reached the limit with my Canon Eos SLR.

The camera arrived at the begining of this summer so the sky was turning bright all night long. Stockholm is at 59° 20′ N. On the day of summer solstice and with the sun less than 7° under the northern horizon I decided to give M57 a "blind" try as it was ideally positioned on the meridian with bright Vega nearby but absolutely invisible to the eye. There were obvious problems of doing a decent polar alignment, centering the ring nebula and reaching proper focus, all this in strong wind, so time was passing by very quickly. I finally managed to get 70 shots of 20 seconds through the luminance filter at prime focus of my Intes M703 Maksutov. 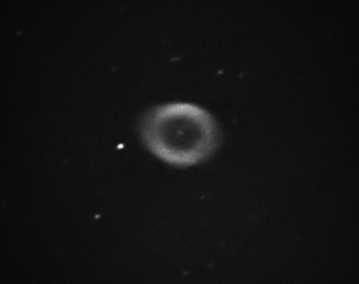 I realized that this camera would allow me to photograph deeper into space than previously possible from my location. Here is a LRGB shot of M57 taken on the 29th of september 2008,22 min lum and a total of 23 min RGB using a Meade f/6,3 reducer on the Intes M703 Mak. 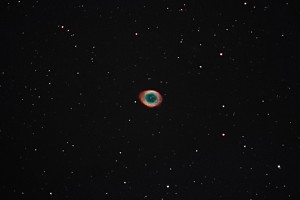 PREV: A Few Thoughts from Germany

NEXT: A New Stacking Program Revealed
-