NEXT: Astronomy Now Review 2/5: Getting Started

Blogged by Jonathan Maron on April 28, 2008 and tagged with Press, Jupiter, Mars, Moon. 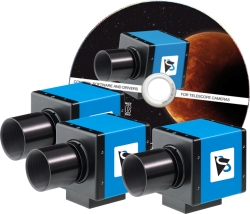 Up until the turn of this century, imaging Solar System objects was either something you spent a huge sum of money on a professional CCD on, or you used film.

The images printed in many astronomy books and magazines up to that date, even from the largest professional ground-based telescopes, were often relatively poor. Then, with the coming of the Phillips ToUcam, video images combined with simple to use software to stack and combine them transformed amateur lunar and planetary imaging.

Exponents of such equipment, like Damian Peach, began producing shots of our Solar System's finest that were often better than any ground-based telescope had been able to deliver over the previous 15-20 years.

After a few years of deserved success, the limitations of the ToUcam, being a USB 1.1 interface, began to become evident. Uncompressed video, something serious imagers required to maintain high quality, was limited to ten frames per second, and the typical sensitivity and colour nature of the CCD of an off-the-shelf ToUcam limited the quality of the final image.

Amateurs modified the ToUcam with more sensitive monochrome CCDs, but still the ten frames per second rate meant that with objects such as Mars or Jupiter, only a certain number of frames could actually be captured before the planet rotated enough to blur the image. This limit in the number of frames, combined with the average seeing, would ultimately determine and limit the final image quality.

Recently, cameras offering much higher frame rates and outstanding sensitivity have become available, two of which, from the leading scientific and industrial manufacturer The Imaging Source, are the subject of this review.

NEXT: Astronomy Now Review 2/5: Getting Started
-