Stephen Roche: Saturn With Its Moons

NEXT: Dietmar Hager Captures the Moon with TMB Apo 9"

Stephen Roche: Saturn with Its Moons

Blogged by Jonathan Maron on April 10, 2008 and tagged with Sample Images, Moon, Saturn.

We recently received an e-mail from Stephen Roche, an amateur astronomer based in Waterford (Ireland).

He submitted an image of Saturn and its moons, which he captured on April 08, 2008 at 22:44. For the capture, he deployed the DMK 31AF03.AS astronomy camera, manufactured by The Imaging Source. 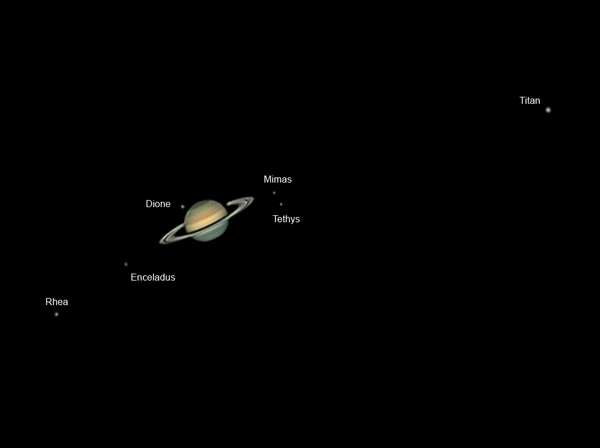 Stephen commented the image with the following words:

Saturn and it Moons imaged on Tuesday the 8th April, 2008 at 22.44pm, using a DMK 31AF03.AS and a CGE 11 inch SCT. I captured an Exposure for the Moons first and then overlaid the LRGB images of Saturn itself to achieve the result.

NEXT: Dietmar Hager Captures the Moon with TMB Apo 9"
-