Blogged by Jonathan Maron on February 29, 2008 and tagged with Sample Images.

Mike Salway is becoming somewhat of a regular to this blog. Recently, he sent in the following images. Click for originals. 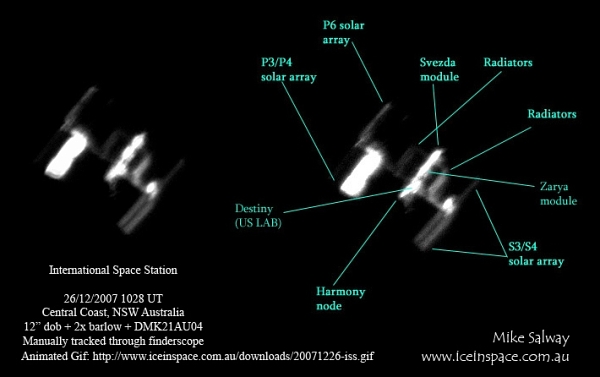 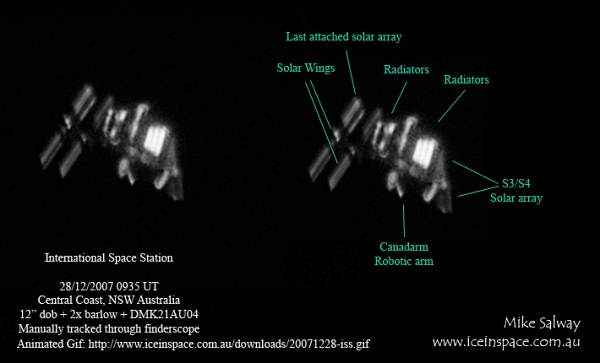 Accompanying his images, he writes:

After a long break, interrupted due to changing jobs, new laptops, processing planetary and deep-space images - I finally got around to finish processing the two ISS images captured on the December 26, 2007 and December 28, 2007.They were two spectacular passes, magnitude -2.4, passing about 70° overhead - though I could only capture them for about 40-50 seconds each, because of trees blocking the horizons.

I put my 12″ newt on the dob base (not on the EQ mount), and aligned the finderscope with a star. I tracked the ISS manually by peering through the finderscope and moving the tube, trying to keep the fast moving bright dot centered on the crosshairs while my DMK 21AU04 (in a 2x barlow) was recording at 60fps. Exposure used was 1/1200s and gain was almost maximum. Out of about 2500 frames captures, less than 100 had the ISS on them, and not all of those were sharp. I need to get a better hit rate!

It was an adrenalin rush, trying to get everything working for such a short period of time. On both occassions I forgot to press record in IC Capture until about 5 seconds had passed! doh! And at the same time I had my Canon 350D and 17-70mm Sigma lens tracking on my EQ mount, pointed at the sky - and I had to remember to press the shutter remote to start the 2 minute exposure for the widefield view. Unfortunately I didn't have time to focus the lens accurately so the stars are blobby.

After all of that, i'm very pleased with the results though. Thanks to Ralf Vandebergh for helping me to identify the structures.

Thanks again, Mike, for all your contributions.