Blogged by Aurélie Le Fort-Beunink on January 5, 2012 and tagged with Reviews, Test report.

Disclaimer: This is a guest post by Dipl.-Ing. Wolfgang Paech, originally submitted to The Imaging Source on November 28, 2011.

In the early summer of 2011 the new model DMK 21AU618.AS was available on the German market and I get one exemplar from Baader Planetarium GmbH for testing the new camera.

The Imaging Source itself is advertising the camera among other thinks with "the model DMK 21AU618.AS is equipped with the SONY sensor CCD ICX 618 ALA, which is extremely sensitive in the near infrared spectral range". 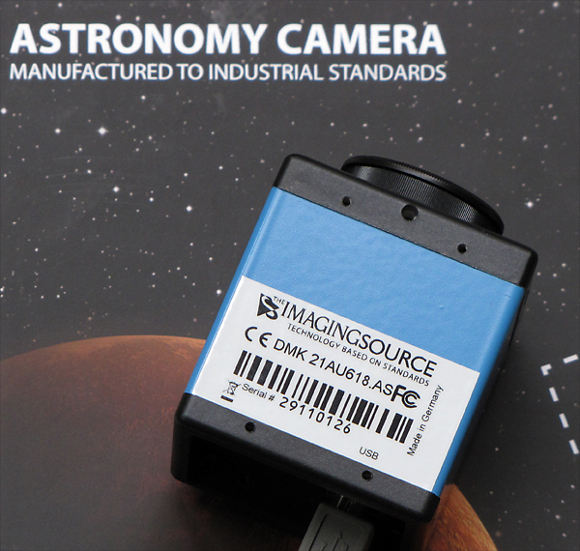 A comparison between the spectral curves of relative sensibility between the SONY ICX 098 BL (DMK 21AU04.AS) and the SONY ICX618ALA (DMK 21AU618.AS) shows clearly, the maximum sensitivity is shifted from the green spectral range (500nm) to the red at 600 until 700 nm. At the near infrared range at 800nm the ICX 618 ALA is as twice more sensitive than the ICX 098 BL. 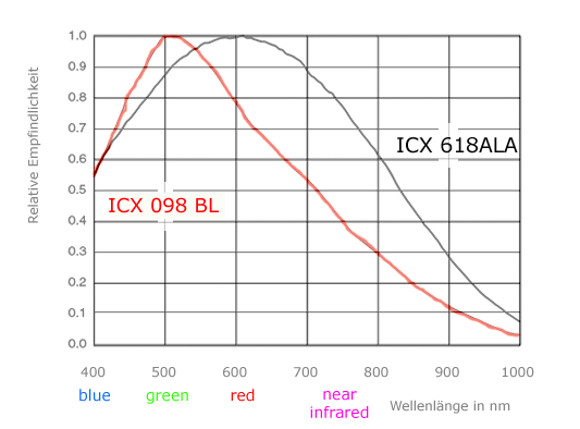 But this is a comparison between the relative sensibilities. How does it look with a comparison in absolute sensitivities? To answer this question, I have taken solar images in three spectral ranges which are shown below.

Unfortunately at this time my DMK 21AU04.AS was defect, so I was forced to take a DMK 31AU03.AS. I know, that this is not absolutely correct with reference to the smaller pixel size of the ICX 204 AL chip in the DMK 31AU03.AS but a trend is clearly visible.

Following a short description of my instruments and the used filters for the different spectral ranges used for this test: 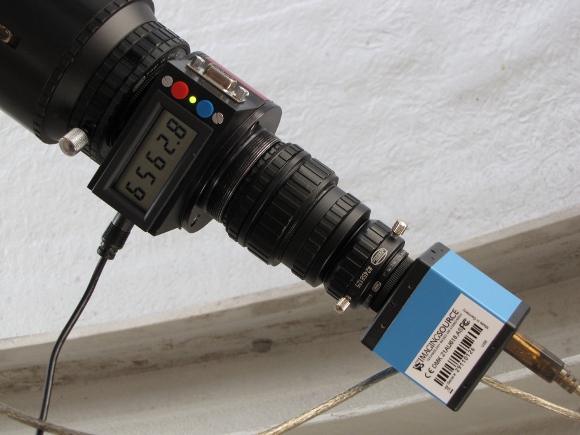 The results in measuring the sensitivity between the two cameras was just comparing the exposure times. Gain setting and the adjustment of contrast was at all taken AVI files absolutely identical. 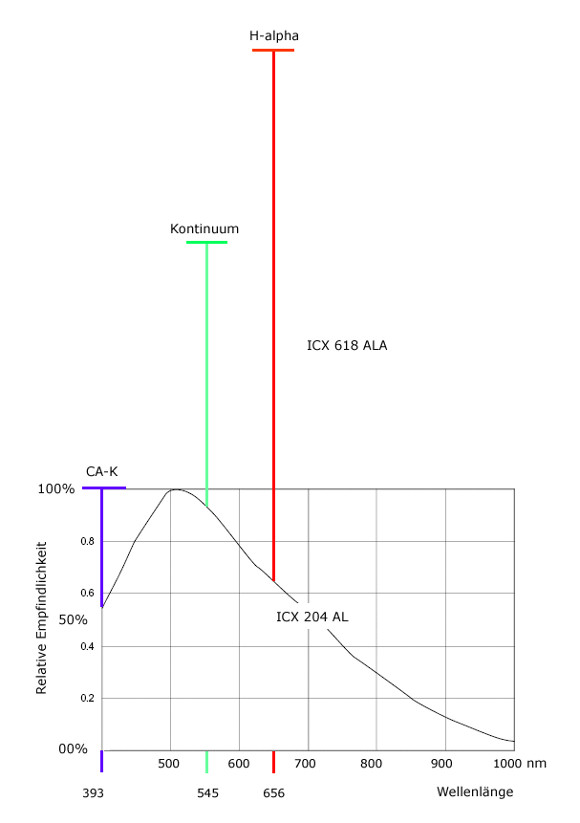 In the blue and in the green spectral range it is not so important to reduce exposure times, because they are also with the DMK 31AU03.AS short enough to "freeze" seeing. But the enormous sensitivity of the DMK 21AU618.AS in the red and in the near infrared spectral range is very important, because seeing conditions in daytime are often really absolutely bad.

Also important is to point out, that reducing exposure times below 1/60 second allow the observer to take the advantage to use the maximum transfer rate of 60 fps. This is important first that the observer gets the maximum of raw frames in a short interval of good seeing and second that the observer is able to document fast changes in i.e solar flares or eruptive prominences in time intervals as short as possible.

Also important for observer who takes RGB movies of as example Jupiter to get sharp images for a rotation sequence without in-motion unsharpness based on the high rotation speed of the planet.

I know, that there is a discussion in several astronomical boards about the appearance of artificial artefacts at high download rates of the raw frames. Stating for me (and several friend, who are also working in web cam astronomy) I have had never problems with this. May be the reason may be, that I seldom use Gain setting higher than 400 (except at dimm prominences) and I don´t sharpen the stacked final image too much.

The left sequence shows the "anatomy" of a class M1 flare at the first of October 2011 (active region 1305). The outermost left column shows the flare in the light of cak-II. AVI files was taken with the DMK 31AU03.AS.

The three other columns show the flare in the H-alpha light with different exposure times. All AVI files taken with the DMK 21AU618.AS.

Caution: the download file in original size is about 2.8 MB.

And one last example for a very fast image sequence. It shows the rotation of Jupiter and a transit of Io and its shadow in a time interval of just 90 minutes.

This are 29 AVI files, each AVI contains 3.000 Raw frames. 240 raw images was stacked for the final image. Instrument was my 155mm Astro Physics refractor, equipped with a Baader Fluorid Flat Field Converter FFC. The focal length was about 4.200mm. Each single raw frame was exposed 1/91 second. A UV/IR blocking filter was used. 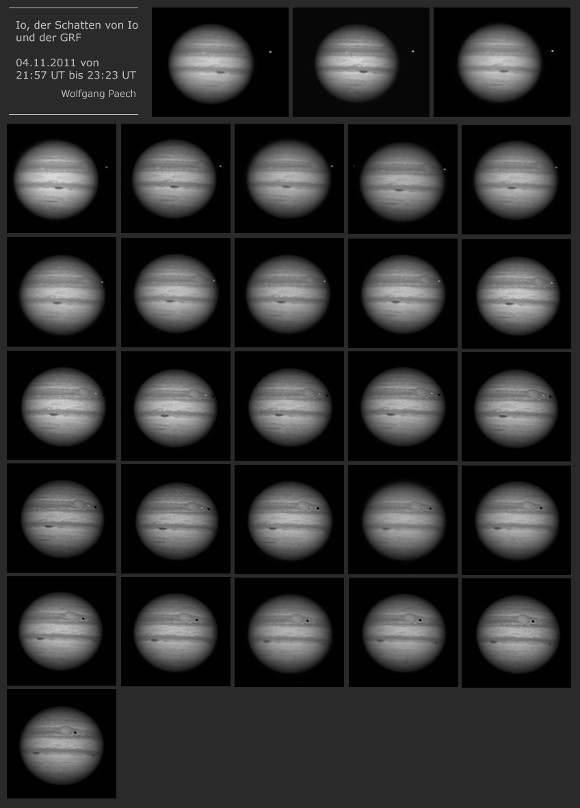 The new DMK 21AU618.AS is a very sensitive camera with low noise, when using with short exposure times.

I have also taken some (single) images with long exposure times between 15 and 132 seconds. The results are very noisy and compared with the DMK 21AU04.AS or DMK 31AU03.AS much poorer.

It is a great camera for taking H-alpha images, fast solar and planet image sequences and also for L-RGB planet imaging, when the raw frames of the L-channel are taken in the near infrared spectral range through an IR-passfilter.

The only drop of bitterness is the small size of the CCD sensor built in the DMK 21AU618.AS, which needs to take mosaic images for larger solar structures in H-alpha or moon features at longer focal length.