Pushing the envelope of planetary imaging with DBK 21AF04.AS

NEXT: Solar Prominence on Christmas Day

Pushing the Envelope of Planetary Imaging with DBK 21AF04.AS

Blogged by Xiao Sun on January 17, 2011 and tagged with Sample Images, Jupiter, Moon.

Jim Melka has been trying to extend the known limit of his DBK 21AF04.AS astronomy camera. In last October, Jim managed to take an image of Ganymede, Jupiter's largest moon, with this camera and compared the photo with the one captured by Galileo spacecraft.

The photo has been slightly zoomed out to fit into the blog page. Click on the picture to open the original one. 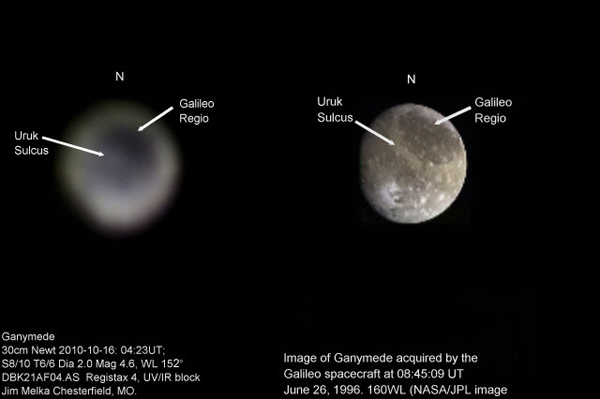 Here is the quote of his mail:

I increased the efl of my 12-inch Newton to allow me to resolve details on Jupiter's moon Ganymede. Please see attachment including image from Galileo probe close to the central longitude of my image. One-fourth arc second features clearly visible. Six hundred frames processed with Registax 4.0.

NEXT: Solar Prominence on Christmas Day
-