Blogged by Xiao Sun on August 10, 2010 and tagged with Sample Images, Jupiter.

Antonello Medugno is an Italian amateur astronomer. He runs the shop MimasLab S.r.l. as one of our Italian distributors. In late July Antonello sent us the following images of Jupiter, accompanied by details of his photography. 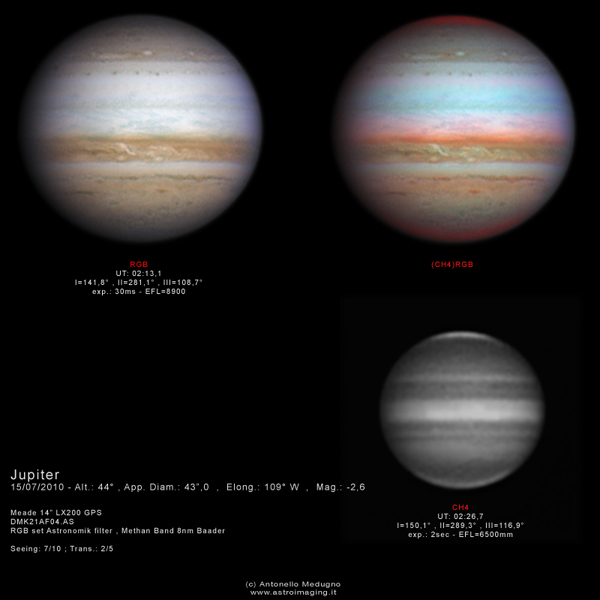 I used a DMK 21AF04.AS from my store (http://www.mimaslab.it) to image jupiter in RGB and CH4 too. I thought that it could be interesting and suggestive to fuse the CH4 channel with the Red channel and create a new semi narrow band image ofJupiter that could give the idea of the methane, or similar signal, distributed along over the RGB Jupiter's image.

In the card I put the RGB and the (CH4) RGB too. A particular processing have undergone the three channels R, G and B,because they come from 100″ long films for each one channel, so the the total time has been about 5 minutes, more than the canonical total timelimit of 120″ to avoid the rotation of the planet.

A particular processing too for the final composed RGB to obtain an equilibrated color image and a specific saturation too. Further studies are ongoing on these two topics.