Mosaic Image of the Sun

Mosaic Image of the Sun

This is a great mosaic image of the Sun submitted by German amateur Michael Wilk. The image includes several Sunspot and Solar Prominence zones. The camera he uses is DMK 31AU03.AS and he captured the videos on 19th of March, 2010.

To have a detailed view click on the picture and open the bigger one. 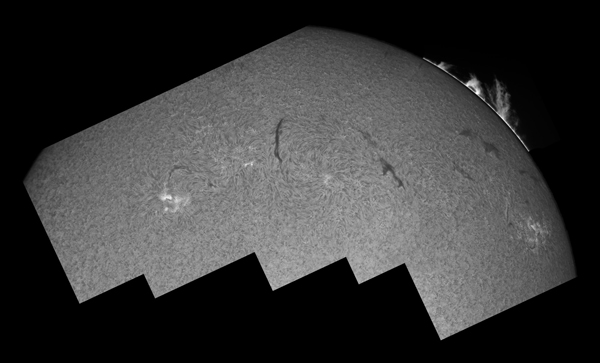 Here is what Michael wrote in the e-mail:

[...] an image that was acquired with a DMK 31AU03.AS (USB version) and a modified 4″ PST at 1m focal length on Mar 19, 2010. Although the videos were taken through an open window and the sun was already quite low at 5pm (12° altitude!), the seeing was quite ok at this focal length. I took 6 videos of the surface and one of the big prominence.
1000 images each, 10-12% were used (AviStack), processing with Fitswork, stitched it together using Gimp. The active region to the left is AR1056, the right one AR1054.

I've got a now, homepage, there are even more images taken with the DMK 31AU03.AS