Blogged by Xiao Sun on July 27, 2009 and tagged with Sample Images, Jupiter, Transit.

The latest Jupiter Impact, which was spotted by Australian astronomy amateur Anthony Wesley on 19th of July, is like a breaking news inside astronomy community. Right after it was announced, millions of astronomy amateurs around the world point their telescopes at this giant gas planet to capture first-time images of the black spot left by this impact.

The following image of this Jupiter Impact is taken by another Australian astro-photographer Mike Salway with his DMK 21AU04.AS Astronomy Camera. 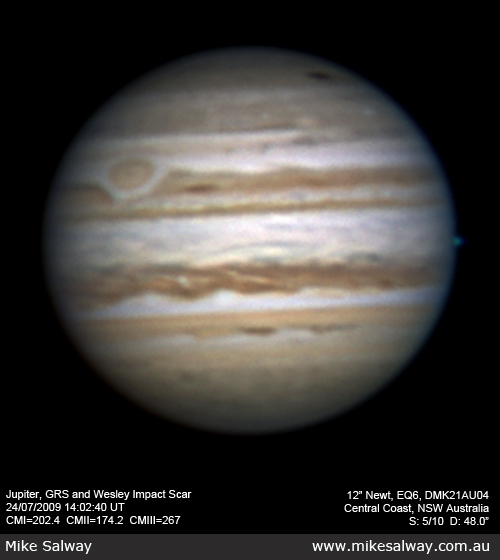 Here is what wrote us in the e-mail:

After breaking the news of Anthony Wesley's discovery <http://jupiter.samba.org/> of an impact scar on Jupiter on Monday morning (while I was waiting to board a plane to Melbourne), Friday night was my first opportunity to capture an image of the now famous "Wesley Impact Scar", or "Bird Strike" (Anthony's forum name is "bird").

I'd been in Melbourne all week and was very frustrated to have not been able to capture an image of it until now. On Friday night, 24th July, the impact scar was transitting while Jupiter was almost right overhead, but unfortunately the seeing conditions were only average, and deteriorated even further as the Bird Strike came more into view.

Hopefully I'll get another opportunity this week, with any luck, in better seeing.

That is a great picture Mike! And you surely will capture a more fabulous image when the seeing gets better!