PREV: Night Side of Venus

We received the picture from Mike this morning. 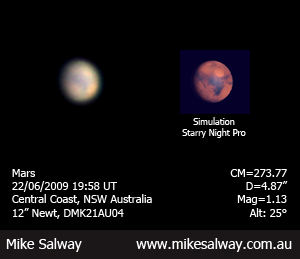 On Tuesday morning, 23rd June 2009 I captured my first image of Mars for 2009. It's still very early in the season, with Mars still 288 million kilometres away, subtending a tiny diameter of a 4.9″ on the sky.

Mars doesn't reach opposition until late January, 2010 when it will be 14 arcseconds in diameter - a lot smaller than it was at its closest in 2003, when it grew to 25″ in diameter.

No polar cap is visible, but the features of Syrtis Major and the Hellas Basin can be seen.

PREV: Night Side of Venus