NEXT: Mosaic Image of the Moon

Blogged by Xiao Sun on April 20, 2009 and tagged with Sample Images, Saturn.

Emanuele Baldani is an astronomy amateur based in Rome, Italy. He took the following images on 08.Apr.2009 with his DMK 21AU04.AS astronomy camera. 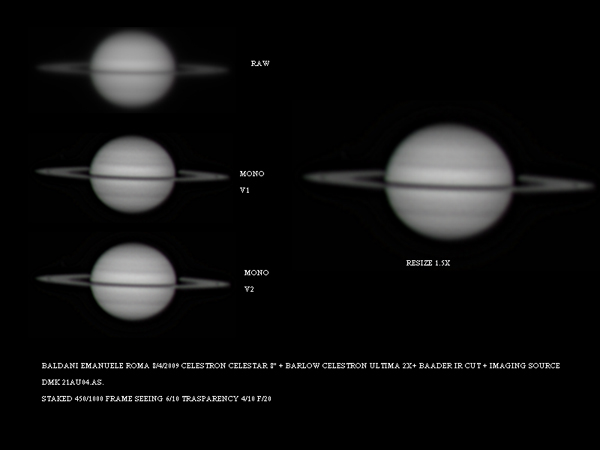 He wrote us in e-mail that

in the late night of 8 april 2009 directly from ROME Italy i tried to get a Saturn pic, the seeing was 6/10 with low trasparency 4/10, but my special astronomy camera Imaging Source DMK 21AU04.AS with its high sensitivity and high frame rate allowed me to get a really good Saturn image!

Tank u Imaging Source u save me!!!

Grazie Emanuele! It is a fine work!

NEXT: Mosaic Image of the Moon
-