PREV: Is That a Space Walking Astronaut?

NEXT: Photos of Space Shuttle Discovery

Mike Salway took this picture with his DMK 21AU04.AS astronomy camera on 21.03, and made the animation with 8 frames out of the image sequence afterwards. 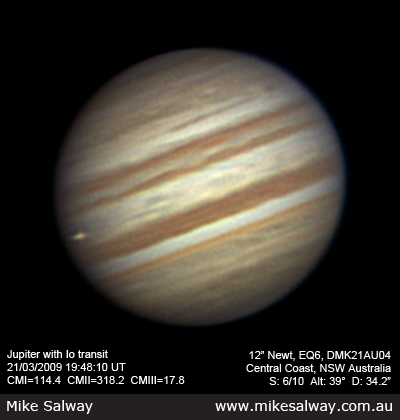 Here is the detailed info on this job:

It was another busy morning (like Friday morning) with an ISS pass, a lovely crescent Moon and then of course Jupiter. Seeing was quite reasonable, and improved as Jupiter climbed out of the muck, reaching an altitude of about
39° literally 5 minutes before sunrise when I captured my last image. The sky was already blue and by this time I could only just see Jupiter naked eye.

The attached image is the best from the session, taken 10 minutes before sunrise and shows Io just about to leave the disc of Jupiter. Oval BA is rising on the right.

I captured 8 frames to create an animation, and you can see the seeing improves as Jupiter gets higher in the sky over the 1 hour of capture time. The first frame shows Io's shadow just leaving the disc.

PREV: Is That a Space Walking Astronaut?

NEXT: Photos of Space Shuttle Discovery
-