NEXT: Clavius Crater on the Moon - by Laurent Langelez

Blogged by Xiao Sun on February 11, 2009 and tagged with Sample Images, Saturn, Sun. 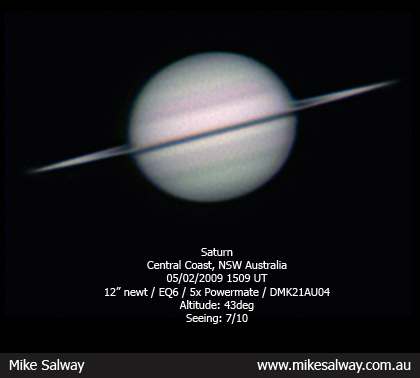 Mike Salway took this picture down there in Australia on 6th January 2009, and he argues it was still his birthday in universal time. Well, technically, of course Mike!

This image of Saturn was captured on the morning of the 6th January 2009 at about 2am, but it was still my birthday in Universal Time / GMT. The seeing was maybe a little above average but I was really tired, so it didn't take much to convince myself that the seeing wasn't good enough and that I should go back to bed. So I only captured 2 runs, and the image below is from the second run. For all I know the seeing may have improved once I went to bed but I was too tired to care

You can see in the image below that the rings are starting to open up slightly again, but they will close again over the next few months until they are completely edge on and disappear from view in early September 2009. Unfortunately Saturn will be too close to the Sun to effectively observe from Earth at that time. Please click the
link to read more capture and processing information.
http://www.mikesalway.com.au/2009/02/09/a-birthday-saturn-image.

Thanks for the great picture!

NEXT: Clavius Crater on the Moon - by Laurent Langelez
-