NEXT: ASCOM - Driver for Astronomy Cameras with MaxIm DL

Blogged by John Berryman on November 20, 2008 and tagged with Community, Sample Images, Moon.

This is post 2 of 4 is from a Mac user in Sweden that joined The Imaging Source community this past summer. He originally purchased the DMK 41AU02.AS specifically for planetary imaging but was quite surprised when the 1/2 chip based CCD camera surpassed all of his expectation. This will be the first of four blogs highlighting Mr Rosen's fine work. He writes:

I recently bought a DMK 41AF02.AS to use mainly on planets and the moon.I use a Mac so I also bought AstroIIDC for the capture. As I live in central Stockholm, Sweden there are obvious limitations for DSO-photography due to light pollution, and I had reached the
limit with my Canon Eos SLR.

[...] This is my latest shot at the Trapezium region in M42. It started out as a project to photograph just the trapezium stars and separate the elusive e and f-components (upper right).

Base exposures 0.5 - 1 sec at prime focus of my Intes M703. At the same time I exposed the nebulosities at up to 40 sec with the L filter, then composited the resultin Photoshop with the color information from a picture taken 1,5 years ago with my Canon EOS. I first removed the overexposed stars of the core then added the 6 trapezium stars from my separate shot (the inserted color image to the left). 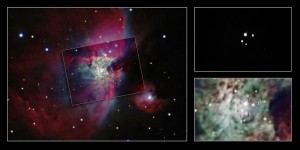 The bakground is a wider field photographed at prime focus of a William Optics FLT 110 (TEC optics) apochromatic reflector. The picture on the lower right is just a blown upp part of the core with the naming of the 6 trapezium stars.

NEXT: ASCOM - Driver for Astronomy Cameras with MaxIm DL
-