NEXT: Callisto Transiting Across the Face of Jupiter

Blogged by Jonathan Maron on June 10, 2008 and tagged with Sample Images.

Pierre-Alain Arnaud has submitted the following images, which beautifully illustrate a series of solar flares, which he captured with the DMK 31AF03.AS FireWire astronomy camera (click for the original): 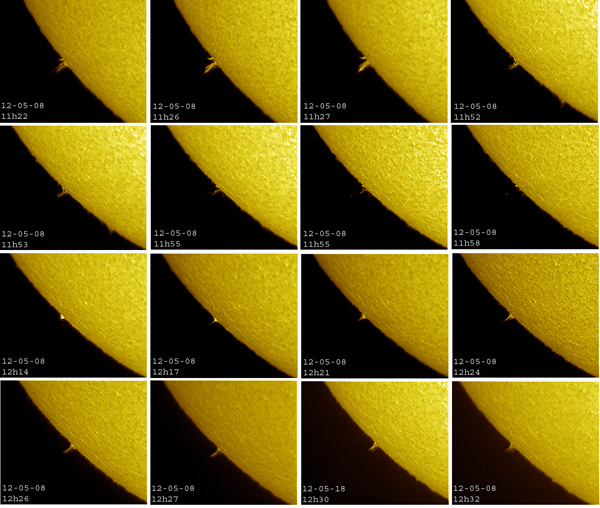 Accompanying his image, Pierre-Alain notes the hardware and techniques that he deployed (translated from French):

The images show the progression of a solar flare, during the course of one hour. They were captured with a PST and FireWire DMK 31AF03.AS astronomy cameras, using the ROI mode. The images were captured on May 12, 2008 between 11:20 and 12:30 from Sigoyer (Alpes de Haute Provence, France). Occasionally, cloud obscured the field of view. Each image was constructed from an AVI file, containing 1000 frames using RegiStax and Photoshop. Only about half of the captured frames were actually used in the final image series.

A great thanks goes out to Pierre-Alain for this magnificent series.

NEXT: Callisto Transiting Across the Face of Jupiter
-