Blogged by Jonathan Maron on May 20, 2008 and tagged with Sample Images, Mosaic, Moon.

Peter Wellmann wrote to us recently to announce that in the next issue of Sterne und Weltraum - a German astronomy magazine - there will be a ten page article reviewing The Imaging Source astronomy cameras in comparison to cameras from competing manufacturers. The magazine will appear on May 21, 2008 on newsstands throughout the German speaking world and other European countries.

In addition to this announcement, Peter also sent us a delightful sample image, which he captured with a DMK 41AU02.AS on April 13, 2008 from his home town of Munich in southern Germany (click to enlarge): 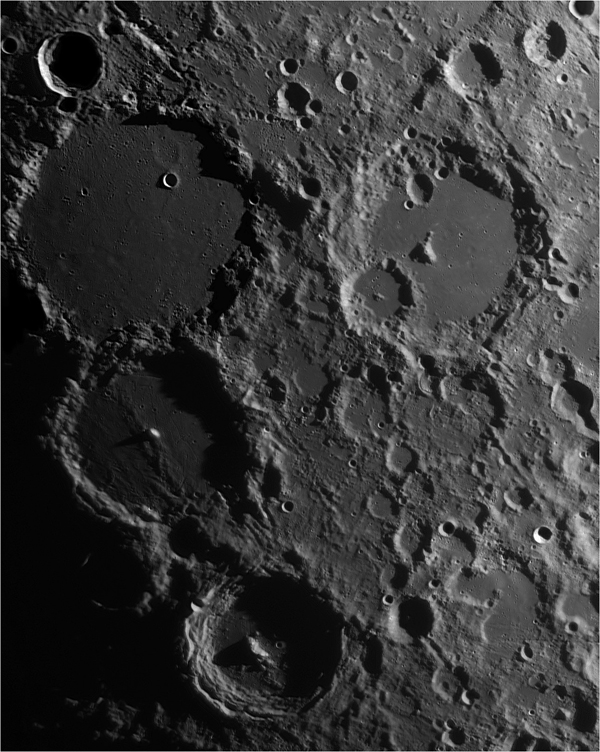 Accompanying his images, he wrote the following (translated from German):

The image was captured on April 13, 2008 by the amateur astronomers Christian and Peter Wellmann in Munich. A Meade 12″ SC telescope with achromatic Celestron 2x Barlow were used. The Barlow allowed the focal length to be extended to seven meters. The camera was a DMK 41AU02.AS, manufactured by The Imaging Source. 850 frames were captured all together. Post-processing was with Registax and Giotto. Processing was not particularly easy, as the region of interest was exactly on the terminator and consequently especially dark. In the end, two image were over-laid to form a mosaic, making the final image around fifty percent larger than the resolution of the DMK 41AU02.AS.

The large crater at the top left of the image in Ptolemaeus, right of that, Albategnius and below Alphonsus and Arzachel. Inside Ptolemaeus, a large number of small craters and structures are clearly visible. Such details are rare on lunar images. The largest of these structures is a very noticeable round crater with a diameter of around 9 kilometers. The smallest structure, which can be observed, is around one kilometer in diameter. This is equivalent to an angle resolution of less than 0.5 arc seconds. This lies at the theoretical limit of the resolution offered by 12″ optics and illustrate the fantastic quality of the Meade 12″ R-Optic telescope. Furthermore, it proves that the DMK 41AU02.AS is one of the best cameras on the market to capture lunar images.

A great thanks goes out to Peter from all at The Imaging Source for his work on this contribution to the astronomy cameras blog. We are waiting - with baited breath - to read the article which will appear in Sterne und Weltraum tomorrow.