PREV: The Astronomy Cameras Blog is One Today!

NEXT: The Webcam is Dead, Long Live The Imaging Source!

Blogged by Jonathan Maron on April 24, 2008 and tagged with Sample Images, Sun.

Nick Howes contacted us recently, submitting the following images. They were captured with a DMK 21AU04.AS astronomy camera. Next week, we will be looking at some more of his work, including a multi-post article, which was originally published in Astronomy Now, a leading astronomy magazine in the UK.

The first image, which he submitted is the Sun in Hydrogen Alpha at F40, focusing on the three recent active regions (click to zoom):

He commentates the image, with:

The Hydrogen Alpha scope I use is a modified Coronado PST has been modified to 80mm aperture, using a combination of Baader Cool ERF filters, various adapters and a William Optics Zenisthstar telescope, this has massively improved both the resolution and the overall performance of the scope, which the only part remaining is the very good 0.7A etalon. I have replaced the 5mm blocking filter with the Coronado BF10.

He also submitted the second image (click to zoom): 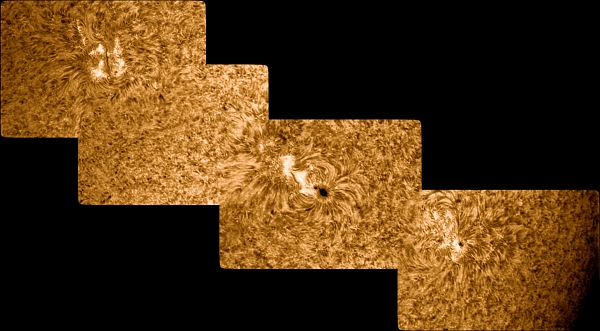 The images making up this composite were all taken on the March 30, 2008 for the high resolution surface, and April 05, 2008 for the prominences, using a DMK 21AU04.AS camera at 60 frames per second, generating over 8GB of data to process. This took most almost a day to just stack/combine and create RAW TIF files, which were then edited and composited using Photoshop CS2 and iMerge.

With the Sun currently still relatively low in the sky, I hope you can appreciate the complexity and difficulty involved in both acquiring and creating this image.

A great thanks goes out to Nick for submitting these spectacular photos!

PREV: The Astronomy Cameras Blog is One Today!

NEXT: The Webcam is Dead, Long Live The Imaging Source!
-