Blogged by Jonathan Maron on September 11, 2007 and tagged with Press. 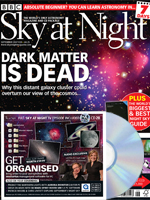 As mentioned in a previous blog post, we have teamed up with BBC magazine Sky at Night to bring you a competition in which you can win one of three astronomy cameras, manufactured by The Imaging Source.

If you know the answer to the following question, go to the competition site and participate.

What is the maximum exposure time of the DMK 41AF02.AS monochrome camera?