Blogged by Jonathan Maron on September 5, 2007 and tagged with Press, Moon.

Today, I have received some more positive feedback about the transmission of the recent total lunar eclipse.

Wow! What sterling photos! Thanks ever so much for sharing them. Will you be making higher resolution photos available later?

Shevill, thanks for all the info. It was great to watch it on the screen as we could not see any sign of the moon outside due to all the cloud.

Outstanding images of your observatory. Hope the moon dog doesn't mean an approaching cloud front for this small hour eclipse. I got up at 2:00 am and viewed a perfect total at 39.52 N. I was not the astrophotographer at this hour as I have been pounded with my teaching schedule. Visual only. I will leave it to you to get the prize winner pictures!

There is no doubt that your live feed was of the highest technical quality, experience sure pays! had all three feeds going at once on my computer and so was able to compare them all. It was interesting to see the screen display as one of them made adjustments to his camera from time to time, and the other feed (the Talbot Observatory) "dropped-out" occasionally. A good job, indeed! I was in and out of the house watching the event in the old-fashioned way as well as the high-tech way.

Great work Shevill. Your images looked really good. I went up to Canopus tonight and it was really windy and unpleasant outside.

Well, typically for us, there's one big cloud in the sky - just one cloud in the whole sky - and it is exactly where the moon should be. These three city blocks must be the only place in the state where you can't see the moon tonight. Just my luck, right? We're still waiting for it to clear. But thanks a lot for talking to me tonight. And it would be much appreciated if you could send us a couple of your own photos of the moon at totality. We'll give you the photo credit, of course! Thanks again. Hope you enjoyed the night.

Today's total lunar eclipse, not directly visible within European countries, could be observed here in central Europe via your webcast on the AU discovery channel website. Thanks for providing us this great event from Australia! I watched this on early afternoon with ending totality and the second partial phase. A wonderful feeling to see it from the other side of our planet.

That is a beautiful photo Shevill and thanks mate, it was one of the best web casts I have seen.

It was wonderful watching the eclipse. I had a nice chardonnay, daughter on lap, pleasant evening for all. Congratulations.

Nothing but cloud here and it seems to be getting worse. Kieran got a quick glimpse about 20 minutes ago but the cloud just seemed to clump together and hide it again. I have been watching your broadcast - it's very impressive. Thanks for taking the time to set it up. Enjoy the rest of the show. I think I might go to bed.

Very glad to hear from you. I hope you will be fortunate with clear skies on the night of TLE. This one won't be observable from Iran, so I would love to watch it through your live webcast too.

Finally, below is a clipping that Shevill Mathers sent me. It is from the August 29, 2007 edition of the Hobart Mercury Newspaper (click to enlarge). 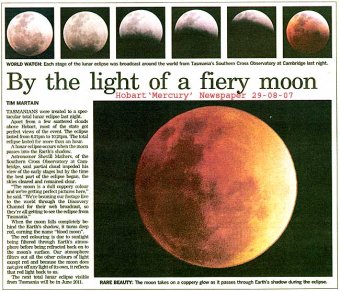 We thank Shevill Mathers for his ongoing support and use of The Imaging Source astronomy cameras.