This past week I had the opportunity of visiting the International Robots and Machine Vision Show held at the Rosemont Convention Center in "The Windy City", Chicago, Illinois. As the yearly gathering for manufacturers, buyers, and sellers of the latest and greatest "toys" for the machine industry (like The Imaging Source), for many, this one was the best yet. The show was chalk full of hands-on demonstrations, new product presentations, and even a brief magic show. This hands-on demo saw many attendees! 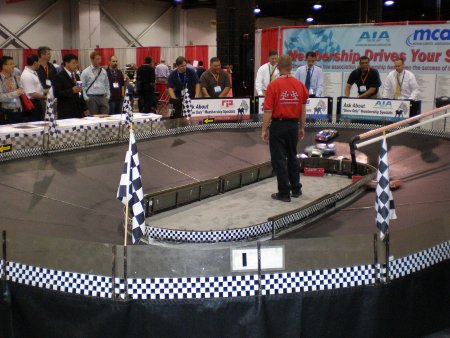 Although I couldn't make it to the Ernie Banks Tribute Night at Wrigley Field, I had the pleasure of shaking hands with Steve Squyers, Principal Investigator for the Science Payload on the Mars Exploration Rover Project. His talk entitled "Roving Mars: Spirit, Opportunity and the Exploration of the Red Planet", provided an up-to-date summary of the missions of Spirit and Opportunity, from their initial conception through their development, launch, landing, and operations on the surface of Mars. 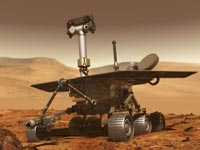 Dr. Squyers shared engineering stories and panoramic photographs never before heard nor seen culminating with remarks on the newly found silica rich Martian under layer further signifying a water laden past for The Red Planet. After reviewing 1200 days of the Mission, the highlight for this solar head-case, was the Rover's self-portrait with the first ever recorded Martian Solar Eclipse in the distant background. For these and more inspiring images, go to the dedicated Rover NASA site: