Blogged by Aurélie Le Fort-Beunink on August 3, 2012 and tagged with Sample Images, Sun.

Lots of solar prominence activity over the last couple weeks. Here are some images of the massive prominence on the northeast limb shot on July 26th. The prominence was rising in this sequence, and lifted off entirely a couple hours after these images were shot. Seeing was not so good, but pushing the camera [DMK 21AU618.AS] shutter speed and gain almost to the limit allowed capturing relatively fine structure through turbulent air. The extended red sensitivity of the ICX618ALA CCD makes a world of difference when shooting Hydrogen-alpha solar. 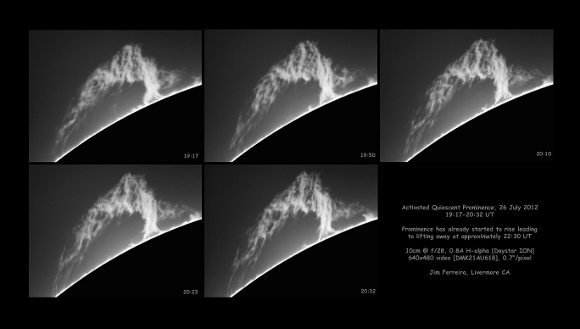