The cloud cover began to break up just as ingress started here in Livermore, California. Air was turbulent, but the extended sensitivity of the DMK 21AU618.AS at 6563 Angstrom allowed 1ms shutter speed, greatly improving the chances of capturing relatively sharp, undistorted video frames. Each of the images in the sequence are made up of the best 200 frames from 1500 frame AVIs processed in RegiStax2. Just before the trailing limb of Venus moved onto the solar disk, I increased exposure to try and bring up any illumination of Venus's atmosphere, seen against the dark background sky. The raw frames show a hint of brighter pixels in an arc at just the right location. In my two images, I ran mild contrast enhancement over the arc of Venus's limb bringing up the faint pixels. I'm pretty convinced I captured sunlight passing through Venus's atmosphere. What do you think? 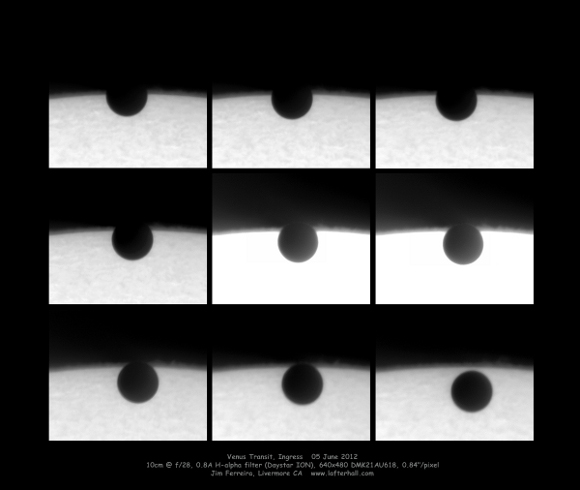