Amateur Astronomy Photo of the Day With DMK 21AU618.AS

Amateur Astronomy Photo of the Day with DMK 21AU618.AS

Blogged by Aurélie Le Fort-Beunink on February 15, 2012 and tagged with Sample Images, Mars.

Today, February 14, 2012, one of my pictures of Mars taken with a DMK 21AU618.AS has been selected as Amateur Astronomy Photo of the Day.

Mars centered in Amazonis Planitia. This hemisphere is particularly uniforme at the telescope. The clear spot near the terminator, at the right, is Mons Olympus. This albedo feature was known by early astronomers as Nix Olympica (the snows of Olympus). Polar Cap shows asymmetries and a lobe extending toward Utopia.

For this particular picture I used a Barlow Celestron Ultima X2. As SCT increase the effective focal lenght as we increase the lenght of the backfocus, the resulting focal lenght is 8,5m f/30 (as calculated from CCD pixel size and ephemeris planet angular size). In Registax I made an aditional x2 resampling.

From home, I have a lot of low level turbulence. Seeing usually is 3/5 or worse since my home is in a urban area, plenty of roofs, heaters fumes... Moreover I´m living near Barajas airport, the fourth european in traffic and placed in a confined wide valley. However, the high sensitivity of the recent DMK 21AU618.AS camera allow me to minimize the turbulence efects by using a high frame rate and therefore to record a high number of frames for each RGB filter. Later, I can select the best ones and get sharp pictures when previously I had blured frames. 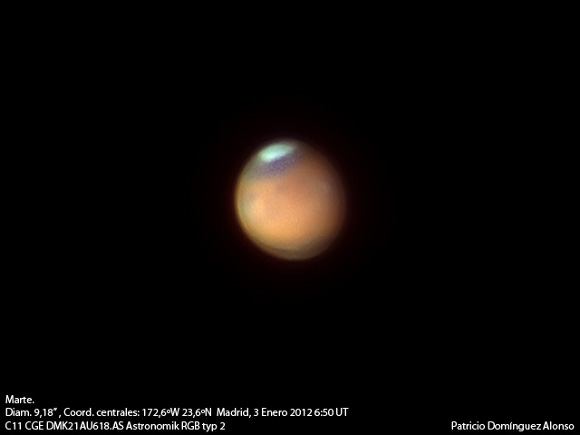