NEXT: Sample Images of Mars and Jupiter

Blogged by Aurélie Le Fort-Beunink on January 26, 2012 and tagged with Sample Images, Jupiter.

One of the results was, that the new DMK 21AU618.AS has drastically improved IR-sensitivity. Living in a region with bad seeing conditions this is a big advantage, because IrRGB composites will deliver better results in bad seeing. Though IR theoretically has lower resolution, it is less affected by atmospheric turbulence. Of course IrRGB will not reach the level of best amateur Images, but is better than no picture at all. So we decided to publish an example to show what is possible under moderate seeing conditions, even if this is not perfect.

All four Jupiter images in the picture were taken with DMK/DBK 21 cameras, the upper two images dating 2011/10/03 with the new 618-chips. Ir was taken using Baader Ir-passfilter 2458385 on DMK 21AU618.AS, RGB was taken in one Video using Baader Ir-blocking Filter 2459207A on DBK 21AU618.AS. Luminance and colour were added in Photoshop. Videos were processed and sharpened using Giotto, 70% of 3000 frames were selected by sharpness an stacked, Mexican Hat filter was applied to the results. Giotto did the job in 10 minutes, and delivered results not significantly worse then other "not easy to use" software produced in 2 hours. Optics was a 30cm SC with Celestron 2x Barlow. We took care that no light was spoiled, an matched exposure time an framerate to 1/30s30fps (colour) and 1/60s60fps (monochrome). Seeing was moderate, the RGB-image was of poor quality and unusable without the Ir-Luminance, the IrRGB result is "better than nothing" still acceptable. 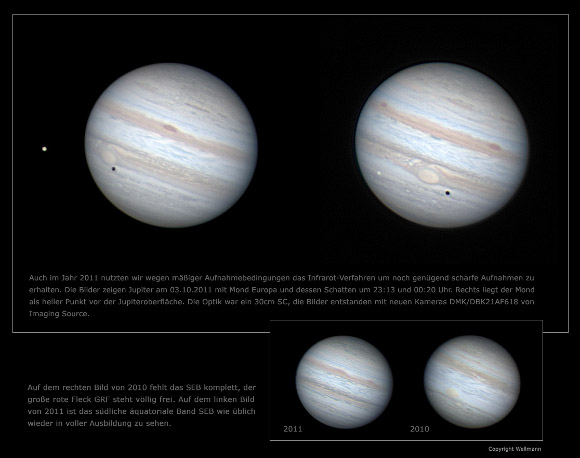 NEXT: Sample Images of Mars and Jupiter
-