NEXT: Best of Jupiter by John Earl - November 2011

Blogged by Aurélie Le Fort-Beunink on November 24, 2011 and tagged with Sample Images, Sun.

I now call this DMK31 image, "The day the atmosphere stood still".

The image was the result of using the The Imaging Source DMK 31AF03.AS with my Takahashi Mewlon 180 F12 telescope and a Takahashi x1.6 Extender. I recorded a 2500 Frame AVI and almost fell off my chair once I had finished processing the movie file in AviStack.

Whilst recording the file in our back garden, at the mercy of the scorching heat of the Sun, I was enthralled by the fleeting moments of wonderful seeing as the occasional short burst of 1024x768 movie frames just "popped" with astonishing clarity on the notebook display. A full aperture solar filter made from Baader astro solar film (Photography 3.8) allowed me to use an exposure of 1/2000 sec, recording at 30fps, further contributing to freezing "the Earth"s atmosphere, or at least that slender column of air rising above my back garden in Brisbane, at 11:01am AEST on 12th November 2011.

With temperatures hovering around 30°C it was hot; the price for my infatuation with the Sun this day was a red neck and peeling shoulders. How we amateur astronomers suffer for our data! 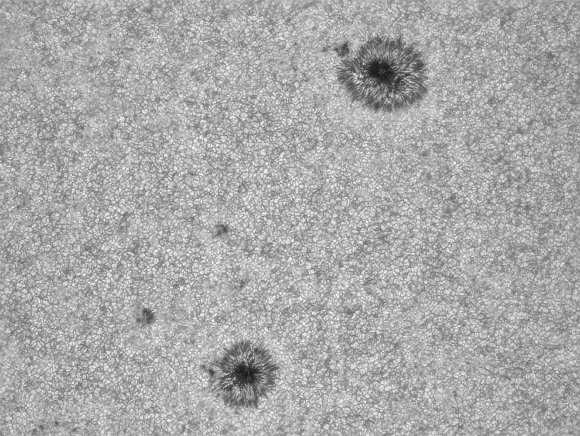