PREV: Some Images with the DMK 21AU618.AS Camera

Here are photos and a time-lapse GIF movie from August 28th 2001 of a fascinating quiescent prominence on the sun's southwest limb. Shot with the DMK 21AU04.AS and my new 100mm aperture H-alpha telescope system utilizing a Daystar 0.8A ION filter. Image scale with the new system is twice that I was obtaining with my Lunt 50mm aperture filter. Fine structure in the prominence movie is impressive. I'm now eyeing your extended IR DMK 21AU04.AS for its added H-alpha spectral response. A camera for astronomy can never be too sensitive, don't you know. If the DMK 21AU618.AS with its ICX618ALA CCD is as low noise as my DMK 21AU04.AS, the new camera should be totally killer for high magnification H-alpha solar viewing and imaging. Keep those sensitive cameras coming! 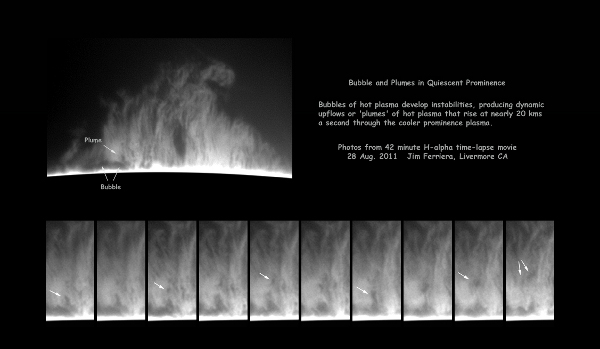 PREV: Some Images with the DMK 21AU618.AS Camera