Great Success of RSpec on NEAF

NEXT: Where to Find The Imaging Source Cameras on ATT

Great Success of RSpec on NEAF

Blogged by Xiao Sun on April 26, 2011 and tagged with Community, Events, Software for Windows, Neptune, Sun.

Over the weekend of the 16th and 17th of April, Tom Field brought his spectrum analysis software RSpec to NEAF astronomy show. His booth attracted a large number of amateur astronomers watching the real-time presentation of this software.

The Imaging Source provided a DFK 21AU04.AS astronomy camera to Tom for the live demo. The demo was so fascinating that some of the attendees actually went down to The Imaging Source reseller's booth and on-the-spot bought a "little blue metal box". Shortly after he returned from New York, Tom sent us an e-mail briefing the success on this event.

The booth was totally jammed, non-stop, both Saturday and Sunday. I also gave a talk and had a table-top booth at the NEAIC imaging conference for the two preceding days. [...]

In the past, amateur astronomers haven't done much astronomical spectroscopy because of a lack of good hardware and software.But now, with a camera from The Imaging Source and the RSpec software, it's easy to capture exciting spectra of astronomical objects, even with a small telescope in an urban location.This isn't just for advanced imagers. Even newcomers to imaging can easily detect the methane bands on Uranus and Neptune, or the Hydrogen absorption lines on distant stars.

This is a photo of Tom in the booth. 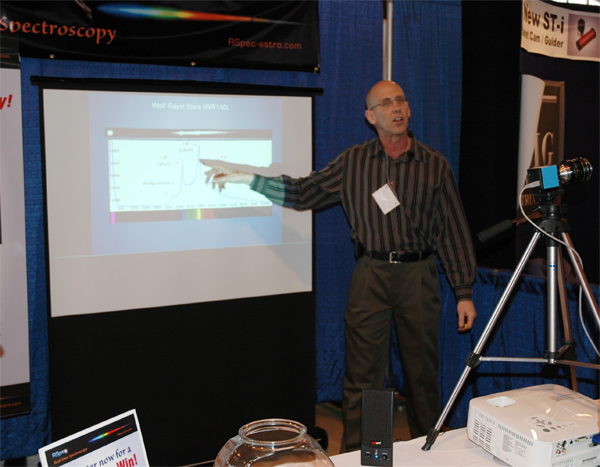 Thank you, Tom. And congratulations on the success of your software.

NEXT: Where to Find The Imaging Source Cameras on ATT
-