The Apennines and Terminator Pole by Peter and Christian Wellmann

NEXT: Spectacular Images of the Moon

The Apennines and Terminator Pole by Peter and Christian Wellmann

Blogged by Aurélie Le Fort-Beunink on November 26, 2010 and tagged with Sample Images, Moon.

This picture was taken by Christian and Peter Wellmann on Februar 3rd, 2009 from a site near Munich, Germany. Optics was a 30cm SC at a focal length of 6m using the outstanding DMK 41AU02.AS astronomy camera. 5000 Frames were stacked and processed with AviStack and Giotto.

The picture shows the mountain range of the Apennines located southwest of Mare Imbrium. The highest peak is Mt. Huygens, 5500m high. The crater at the left end of the mountain chain is Eratosthenes, diameter 60km and 5000m high ringwall. The large crater to the upper right is Archimedes, diameter 100km, up to 2000m high. Next to Archimedes the 40km crater Autolycus, above Autolycus Aristillus measuring 55km in diameter.

The famous Headley-Rill to the left of 4800m high Mt. Hadley was the landing site of Apollo 15. To the lower left of the Hadley-Rill Mt. Bradley is located with the crater Conon on the southeast slope. In the middle of the mountain chain the highest peak Mt. Huygens is located, the left end of the high mountains is marked by Mt. Wolff.

Very interesting is the fact that the quality of this picture is good enough to show the famous Ina-structure found by NASA, which might be one of the geologically youngest features on the surface of the moon. Ina is marked with a white arrow. 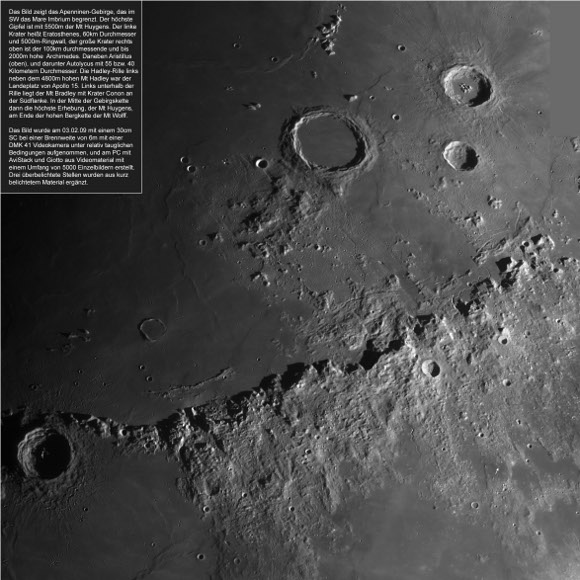 This nice picture was taken by Christian and Peter Wellmann 2009/02/03 from a site near Munich, Germany. Optics was a 30cm SC at a focal length of 4m utilizing the outstanding DMK 41AU02.AS video camera. Several videos were stacked and processed by AviStack and Giotto. Then they were combined to this large picture.

The upper left shows the famous Straight Wall with crater Birt and Rima Birt to the left of the Straight Wall. 2/3 down directly at the terminator the large crater Clavius with a diameter of 220km and up to 5000m high structures surrounding the crater floor is seen lurking out of the dark. The small but deep crater well overhead of Clavius (about halfway down in the picture) with a prominent central peak is Tycho.

The large crater with central peak below Clavius is Moretus. If you follow the line from the central peak of Moretus leading over the bright mountain range south of the crater below Moretus, you will almost exactly hit the Lunar Southpole located on the left rim of crater Shackleton (white arrow).

NEXT: Spectacular Images of the Moon
-