Image Sequence of Jupiter from Hongkong

NEXT: Set Up the GigE Cameras on PC

Image Sequence of Jupiter from Hongkong

Blogged by Xiao Sun on November 13, 2009 and tagged with Sample Images, Jupiter, Animation.

These Jupiter pictures were sent by Savio Fong, based in Hong Kong. He took them on the night of Sep.17th. 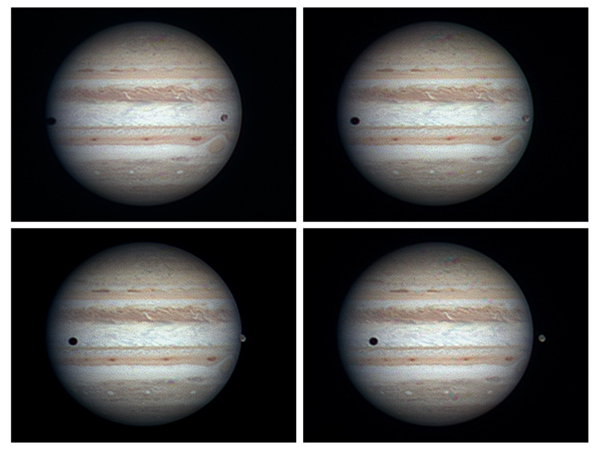 As he described in the e-mail:

[...] It was a busy night on Jupiter on Sept 17th. I drove my telescope to sea-side and overall the seeing there is quite good and stable. Usually under clear nights, I can image for an hour or two continuously without dropping any videos and create the animation, e.g, I took >100 videos for 2.5hr or so that night, but only the last 30mins not useable as Jupiter is getting low. Everytime when I image the Jupiter, I will pack up a 200Lb monster and drive 45mins there, but the result really worth the effort.

My telescope is a 203mm F7 APO refractor.

After some "tough" work, finally I am able to put together a series of images of Jupiter and Ganymede, images taken in 40mins. Originally I planned to take LRGB so the gain of RGB channel is push to the top, but later found just RBG is good enough and L channel do no good to my final image, so the final image is a bit noisy.

NEXT: Set Up the GigE Cameras on PC
-