PREV: The Imaging Source Back from "Ciel En Fête"

NEXT: AstroTracker - a Third Party Software for Astronomy Cameras

The following pictures of International Space Station were taken by Mike Salway with his DMK 21AU04.AS astronomy CCD camera in March: 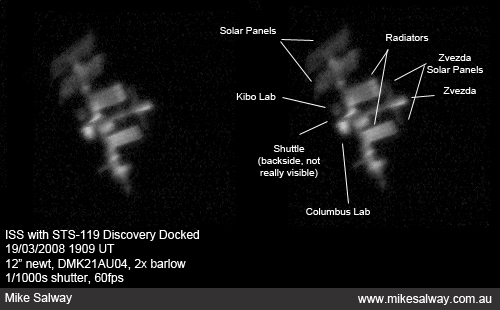 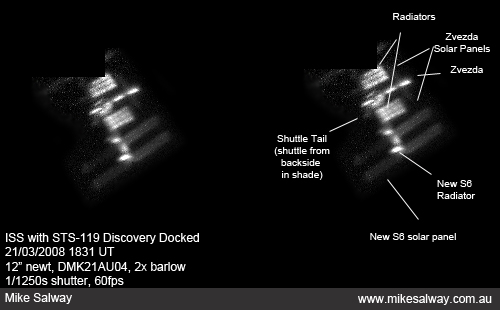 In his e-mail, Mike wrote:

It's been a week but I finally got around to processing these images. On the mornings of Friday 20th and Sunday 22nd March I had a few bright passes of the International Space Station (ISS) over my location. The great thing was that the Space Shuttle Discovery (STS-119) was docked at the time so I was hoping for good seeing and hoping I'd be able to track it accurately. I was able to capture reasonably detailed images during both passes, but of course you always want more. For the image on the 20th, my shutter speed was a little too slow so the frames were a bit soft. The lighting and angle meant the backside of the shuttle was facing us and was not illuminated and could not be resolved. The image from the 22nd shows a lot of detail and structure in the radiators and also includes the new S6 solar panel that was installed by the STS-119 crew on the 21st March. Space Shuttle Discovery is barely visible - only it's tail is illuminated and was just about the noise level.

PREV: The Imaging Source Back from "Ciel En Fête"

NEXT: AstroTracker - a Third Party Software for Astronomy Cameras
-