NEXT: RGB Planetary Imaging with a Monochrome Camera

Blogged by Jonathan Maron on March 18, 2008 and tagged with Sample Images, Moon.

Mario Weigand, who is based Offenbach am Main, Germany is slowly becoming a regular to this blog. We have published quite a lot of his work in the past months. In the middle of last month, the following image, which he captured with his DMK 31AF03, was published on LPOD - Lunar Photo Of The Day (click for full resolution version) : 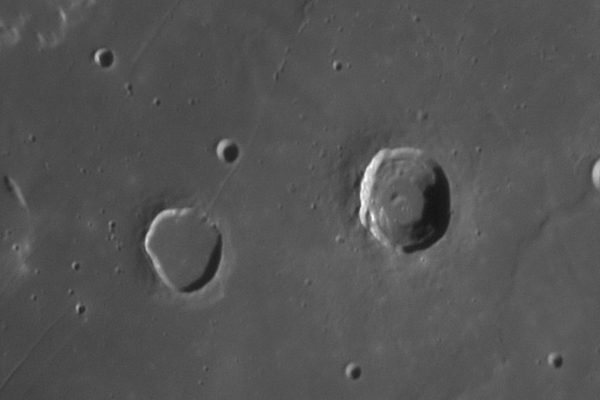 Chuck Wood, the moderator of the site, posted the following commentary:

Wonderful! Ross, Maclear and the northwest corner of Mare Tranquillitatis - an area that has not been featured previously in high-res LPOD views. This means that there are new stratigraphic relationships to untangle. Maclear, the 20 km wide crater to the left is a Gambart-type crater with walls that appear to be triangular in cross-section (rather than much steeper on the inside than the outside). These craters have no terraces or central peaks and their flat floors are roughly at the same elevation as the surrounding maria. They are always surrounded by younger maria as shown by the well defined break in slope where their outer rims meet the maria. Are they normal complex craters transformed to this characteristic morphology by lava on their floors and surrounding them, or they basin secondaries - both suggestions have been proposed. Ross (26 km) is more complicated. The roughness associated with its near rim ejecta seems to be under the mare in some places and perhaps on it in others. And there is a hint of a faint ray to the upper right. I think that only thin layers of lava flows cover the ejecta, and the crater is older than at least the youngest lavas that surround it. Ross is a Tycho-like crater with slightly muted terraces and a central peak that is reduced in relief by lava fill. The rille that extends from the rim of Maclear northward (up and slightly to the right on this image) is intriguing. Does the rille cut the crater rim? Perhaps, but it doesn't cut its floor. To the north the rille fades to near indetectablity but its likely continuation is marked by four or more elongated depressions. I interpret these as collapses in the roof of the underlying lava tube. And just at the top edge of the image is a partial oval ridge - is this a pyroclastic vent? There is a lot going on here, with more to fully understand.

Thanks go out to Mario for the image and Chuck for the commentary!

NEXT: RGB Planetary Imaging with a Monochrome Camera
-