NEXT: Dust Lines on Mars

Blogged by Jonathan Maron on September 28, 2007 and tagged with Sample Images, Venus.

John Chumack at The Chumack Observatories has posted a series of Venus images, each taken with different Barlow lenses (2x and 4x). The series was captured with a DMK FireWire camera and 10″ SCT from his backyard in Dayton, OH, USA.

Click on the following image for the full sized version: 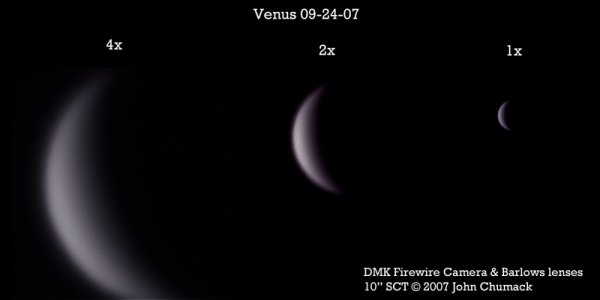 In the forum, John writes:

Venus was only about 20 degrees off the horizon when I took these, so seeing sucked a bit, I really should have waited until it got higher for the higher barlow mags, 4x is a bit much, it did not quite fit in the FOV either.
[...]
Captured 60 sec avi's, stacked in Registax4, and assembled in Adobe PS.

Thanks go out to John for sharing these images with the community.

NEXT: Dust Lines on Mars
-