Blogged by Jonathan Maron on August 23, 2007 and tagged with Sample Images, Moon, Mosaic.

Mick Hyde from Swindon in the United Kingdom has posted the following lunar image on LPOD.

I like this image because its so much like what I observe with a moderate power view of the Moon. There is the main object of interest - Aristarchus and its plateau - and then hundreds of kilometers of other things to notice. The image captures the feeling of the Moon's curvature, with the mare bending away to Eddington near the limb. 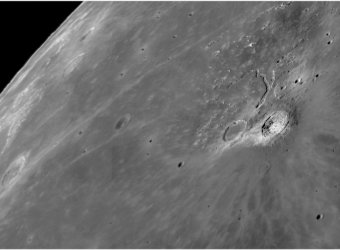 A sequence of images was captured with the DMK 21AF04.AS astronomy camera and assembled using RegiStax to produce the above mosaic.

A big thanks go to Mick for his work with The Imaging Source astronomy cameras.