NEXT: Solar System Bodies with Diameter Larger Than 320 Km

Blogged by Jonathan Maron on June 7, 2007 and tagged with Sample Images, Jupiter, Saturn.

Christopher Go, of Cebu City, Philippines usually observes and captures images of Jupiter and Saturn. He reports to several astronomical organizations throughout the world, including NASA and ALPO.

Christopher became an overnight celebrity in the astronomy community when he discovered Red Spot Jr. (aka Oval BA) on February 27, 2006. He immediately alerted the scientific community and was headlined on NASA's web site and reported upon worldwide (for example here, here, here, here, here and here).

Below is his famous image: 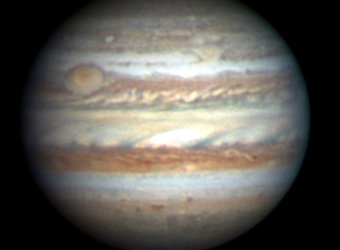 For his work, he deployed a Celestron C-11 Schmidt Cassegrain telescope, mounted on an AP-900 equatorial mount and The Imaging Source DMK 21BF04 monochrome camera. This trigger camera is normally deployed in industrial applications. Christopher was one of the first to try using The Imaging Source FireWire cameras for astro-photography and is thus a pioneer in the field.

Christopher has set up a web site with the sole purpose of monitoring Red Spot Jr. It contains a number of images that he has personally captured, as well as several from other astro-photographers:

Further to his research on Red Spot Jr. Christopher is again observing Jupiter. He has published several very recent images on his web site. Again, all images were captured with The Imaging Source DMK 21BF04 monochrome camera:

A great thanks goes out to Christopher for his on going work with The Imaging Source cameras and the spectacular images that he publishes at frequent intervals on his web sites.

NEXT: Solar System Bodies with Diameter Larger Than 320 Km
-