NEXT: Sample Images of the Moon Captured with DMK 21AF04

Blogged by Jonathan Maron on April 30, 2007 and tagged with Software for Mac OS, Moon.

Craterlet for OS X is designed to give Mac users a simple application with which to capture images from DCAM compatible cameras, such as our range of astronomy cameras.

The application allows planetary and lunar images to be streamed to the hard disk in BMP, JPEG, PNG and TIFF formats.

Although still in an early stage of development, the application has been tested with the astronomy camera DMK 31AF03.AS and firewire cameras from other manufacturers.

Below is a screenshot of the Windows version of the software. 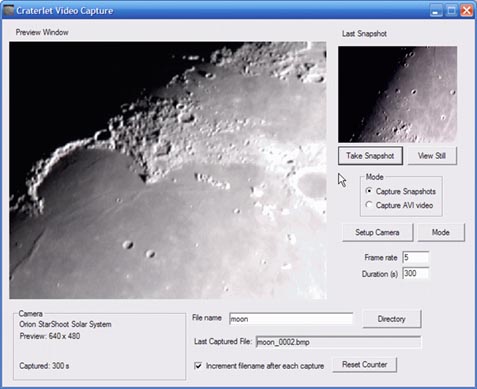 Stark Labs, the authors of Craterlet, welcome assistance users can provide in testing. They would be delighted, if beta testers would contact them with bug reports, comments and constructive criticism. Furthermore, there is a Yahoo! Group to offer community support.

Craterlet OS X is freeware and requires OS X 10.4 in order to run.

Learn more about the software and download the pre-release version at:
http://www.stark-labs.com/prerelease.html

NEXT: Sample Images of the Moon Captured with DMK 21AF04
-